“We took all of the equipment from the Impact 100 grant and it works great in our new larger facility,” says Executive Director Joyce Johnson. “We even moved the rubber floor and the mirrors. We really took it all!”

The new location, 6847 Hillsdale Court, is located off of Shadeland Avenue in an office park that once belonged to Hillsdale Nursery. The new facility is 500% bigger than the subleased gym that was part of Peak Performance. 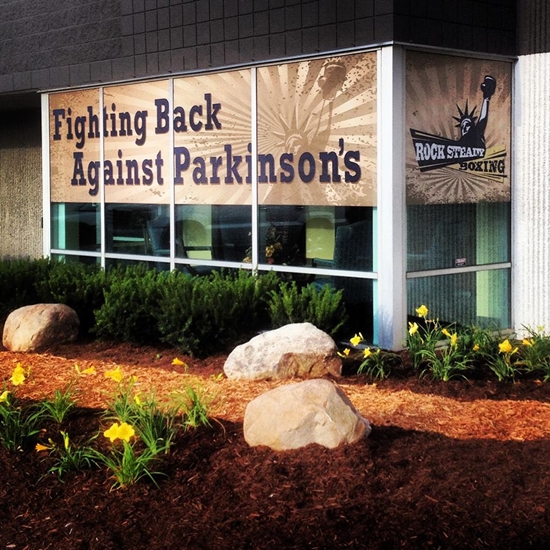 The new Rock Steady Boxing (RSB) gym will not only increase the number of people fighting against Parkinson’s in Indianapolis, but also will allow the agency to reach out to the United States and the world with its inspiring and innovative method of defeating this debilitating disease. Indianapolis’ RSB continues to spread their successful training and noncontact method to many others.

The new facility is a center for people with Parkinson’s and the newly diagnosed. Now when a neurologist hands out this devastating diagnosis the next words are, “There is a way to fight back. Here’s how.”

The Rock Steady Boxing website lists 12 affiliate Parkinson-centered gyms. One of the centers will be located as far away as Australia. There are other gyms coming soon in Michigan and New York that will join existing sites in California, Illinois, Ohio, Pennsylvania and Washington, D.C., plus four other locations in Indiana.

To learn more about the difference that Rock Steady Boxing makes in people’s lives, take a look at this powerful and inspiring video from Purdue Parkinson’s Disease Research and Rock Steady Gym.

Congratulations to our 2010 grantee Rock Steady Boxing as they continue to reach others with Parkinson’s throughout the country and world!

NeighborLink Indianapolis received a Change Maker Grant of $100,000 in June 2021 from Impact 100 Greater Indianapolis. They submitted the following report in December 2021 to keep our members informed on what they are doing with the grant money to date. Please list the primary goals identified in your proposals and describe the progress you have…

Big Car Collaborative, the recipient of a residual grant of $4,250 in 2014, recently gave us an update on what impact our grant had on their organization. Fun Fleet reached 300 kids on the Far Eastside and International Marketplace last summer! They traveled with the Indianapolis Public Library’s Bookmobile to 10 apartment complexes for 8…

Last night, Impact 100 president Karen Holly announced that Impact 100 will be awarding $117,000 to five local nonprofits this year. In June 2014, one grant of $100,000 and four residual/unrestricted grants of $4,250 will be awarded. Nonprofits’ LOIs are due tomorrow, January 17. The announcement event was held at Tindley Collegiate, the recipient of…

“If you operate in your values, and you are determined to find a way, you will always be able to do the right thing.” Shannon Schumacher